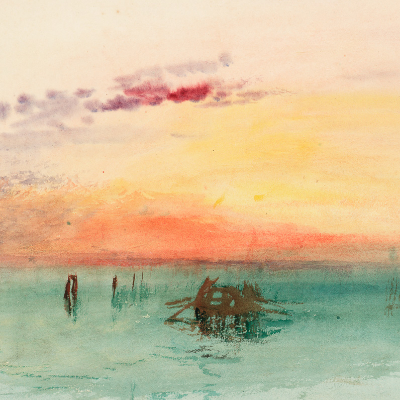 Join us for this special night JUST FOR EDUCATORS in J.M.W. Turner: Watercolors from Tate. Special exhibit overview by Nicholas Bell, Senior Vice President for Curatorial Affairs and editor of the new book, Conversations with Turner: The Watercolors.  Pizza and beverages will be provided.

Mystic Seaport Museum, in partnership with Tate, London, will host a major monographic exhibition devoted to the watercolors of one Britain’s greatest painters: J.M.W. Turner (1775-1851). Mystic Seaport Museum will be the only North American venue for the exhibition, which will be on display October 5, 2019-February 23, 2020.The exhibition – curated by David Blayney Brown, Tate’s Manton Senior Curator of British Art 1790-1850 – will provide an exceptional opportunity to see key works spanning the entire career of the famous artist. A unique collection of 97 works, the selection will provide a view into the evolution of the artist’s vision and creative process.
“Few artists have captured the beauty and majesty of the sea as J.M.W. Turner. Anyone who has sought art that accurately represents their personal experience of the sea has had to contend with the sheer genius of his lifelong look at that subject,” says Steve White, president of Mystic Seaport Museum. “This is not an exhibition of the sea, but Turner represents for so many the most sublime representation of that feeling in art, and this remarkable exhibition is a unique opportunity to step into his world and view in this country some of the riches he left his nation upon his death.”

The exhibition at the Museum – divided into seven thematic sections – focuses on the critical role played by watercolors in defining Turner’s deeply personal style. The 97 works have been selected from the vast legacy that comprises more than 30,000 works on paper, 300 oil paintings, and 280 sketchbooks, known as the “Turner Bequest,” donated to Great Britain after the artist’s death in 1851 and mostly conserved at Tate Britain. The bequest includes the entire body of works housed in the artist’s personal studio and produced over the years for his “own pleasure,” to cite the words used by the contemporary critic John Ruskin.While Turner is perhaps better known for his oil paintings, he was a lifelong watercolorist and fundamentally shaped what was understood to be possible within the medium during his lifetime and after. An inveterate traveler, Turner rarely left home without a rolled-up, loose-bound sketchbook, pencils, and a small traveling case of watercolors. These memories of journeys, emotions, and fragments of landscapes seen during his long stays abroad illustrate the development of Turner’s stylistic language focused on experimenting with the expressive potential of light and color.

The intimate and personal character of the works on display will also provide an opportunity to explore the man himself, gaining an understanding of how the radical developments in Turner’s style anticipated trends of the late 19th century. From his love of seaside towns to his interest in depicting atmospheric English and Alpine landscapes, and his detailed study of domestic interiors and architectural reliefs, the artist devoted himself tirelessly to experimentation, particularly in watercolors, with a compositional and stylistic freedom and an innovative and surprising use of colors that led his peers to believe that Turner “appeared to paint with his eyes and nose as well as his hand.”

Deemed to be an extraordinary artist ever since his own time, Turner has had a profound and continuing influence on artists that continues to this day.

The exhibition will be accompanied by a major new publication edited by Nicholas Bell, the Museum’s senior vice president for Curatorial Affairs. Titled Conversations with Turner: The Watercolors, the book will bring together scholars of Turner’s art from around the world to engage with each other about the force of his paintings and why they continue to serve as a touchstone for Western culture.

Please register by filling out this Google form:  https://forms.gle/1ZUNPfHCqpeQzQ3N6.  You will be contacted regarding the location of the event and other details.  Thank you!