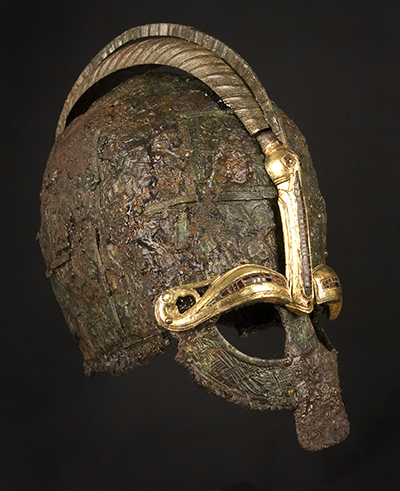 Join us for a special teacher night in our two new exhibits, The Vikings Begin and The Vinland Map, opening in May 2018!

In The Vikings Begin, priceless treasures, including helmets, shields, weapons, glass, and other artifacts that are safeguarded at the Gustavianum Museum of Uppsala University in Sweden, Scandinavia’s oldest university, make their way to Mystic Seaport. These collections, dating as early as the seventh century, are now the focus of a major research initiative designed to significantly advance our understanding of how the Norse culture evolved. Thematic sections on Viking warfare, trade, the Baltic Sea, a ship burial, Norse gods, and relations to other cultures will employ rare archaeological finds in the discovery of how this maritime society lived more than a millennium ago. This exhibition represents the first instance most of these artifacts will have ever left Sweden.  Mystic Seaport’s installation will be the international debut of The Vikings Begin, and is made possible in collaboration with the Gustavianum, Uppsala University Museum.

Science, Myth & Mystery:  The Vinland Map Saga will chronicle the story behind the controversial Vinland Map, first unveiled by Yale University in 1965.  This parchment map was dated by Yale to about 1440 – an incendiary claim as the map depicts at its far western edge Vinland, the mysterious land discovered by explorer Leif Ericsson in about 1000, what we now know to be Newfoundland. Did Norse knowledge of the New World exist within mainland Europe before Columbus sailed? The Map suggests so. Its publication riveted a public deeply invested in the question of First Contact, and eager for evidence of an American connection to Viking history. The Map’s discovery also ignited a firestorm of debate as scholars, historians, and scientists across the globe argued over its meaning and authenticity. Today most scholars concur the Map is a forgery, which does nothing to diminish the role it has played in our national conversation about who we are and where we come from.

Science, Myth & Mystery brings the Vinland Map itself to public view for the first time in the United States outside of New Haven in more than 50 years. Mystic Seaport will engage historians, archaeologists, scientists, and other leading experts to share the Map’s story, and discuss its out-sized role in modern American history.

This exhibition is made possible in collaboration with the Beinecke Rare Book and Manuscript Library, Yale University.

Food and beverages will be provided.

To register, please click on this link and fill out our short Google form.  If you do not receive a confirmation email with directions, please email Krystal Rose (krystal.rose@mysticseaport.org).