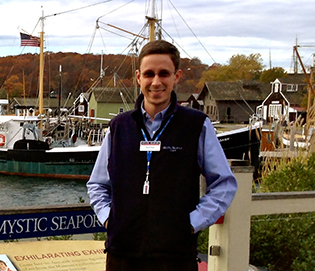 Born and raised in Groton, Connecticut, Dayne graduated from the University of Connecticut at Avery Point in 2011 earning a BA in American Studies with a concentration in History.  He also holds an MA in Museum Studies through Johns Hopkins University.

Dayne first interned with Mystic Seaport Museum in the Summer of 2010.  Later, in May of 2012, he became regular staff in the Collections Department where he, along with a team, aided in the preservation and relocation of over 20,000 artifacts.  Afterwards, he served as a Museum Educator, Exhibit Interpreter, and Planetarium Lecturer, and he also held a position in the Museum's membership department.

Dayne is no longer at Mystic Seaport Museum, but keeping his love of history alive as the Director of Education at the Slater Memorial Musuem in Norwich, Connecticut.