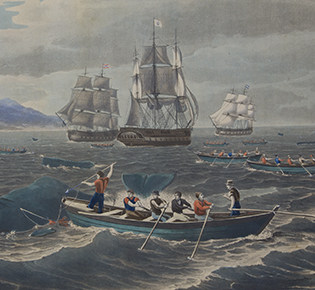 Aquatint of famous Rotch Fleet; among a school of sperm whales off the coast of Hawaii. © Mystic Seaport, 1955.491.

This story map is about Amos Washington George, the youngest child of Peleg and Lucretia Fagins George and a nephew of "Captain" Peter George.  He was a third generation mariner from Mashantucket and knew well the dangers and opportunitiees of a seafaring life.  His older brother, "Captain Austin," was known to the whaling captains of the area as "one of the best whalemen that ever stepped aboard a ship."

Amos was also a successful whaleman, having been on at least eight whaling voyages between 1848 and 1867.  After spending many years whaling out of Hawaii, he returned briefly to Mashantucket and boarded with other seamen in one tribal house in 1870.  He did not remain on the reservation for long and almost certainly left to follow the sea. Amos was identified on tribal member lists until 1886 when he appears to have met an uncertain end.