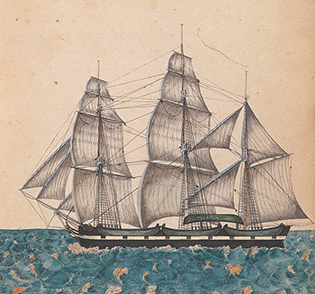 This map represents a voyage of Connecticut Indian mariner, Peter George, who sailed on the Bark North America in 1839. The map is based on a journal kept by Francis Allyn Olmsted from 1839-1841.  This particular voyage is representative of the movement of the American whalefishery into the Pacific Ocean where the ports of Hawaii and San Francisco soon emerged as important centers of commerce.  While in search of whales, vessels visited many places (in this voyage, Galapagos Islands, Ecuador, Hawaii), cultural contacts increased, and America expanded its influence.

The North America left New London, Connecticut in October 1839, bound to the Pacific Ocean.  After stops in the Azores and Cape Verde Islands, the vessel rounded Cape Horn and headed north to Tacames, Ecuador.

The author of the journal, Olmsted, was not a crew member, but a passenger.  His poor health led him to look for a warm location in the Pacific to recuperate.  In 1841, he published Incidents of a Whaling Voyage based on his experiences on the Bark North America from 1839 to 1841.  Olmsted produced about a dozen lithographs for his book but noted in the introduction that they were very expensive and could not furnish the complete set of 50 or 60 illustrations that he drawn in his journal.  Olmsted’s journals, recently discovered in the Beinecke Library at Yale University, have yielded an extraordinary assemblage of images from his travels.  Through his descriptions, lithographs, and watercolors, Olmsted's work represents one on the most significant and complete depictions of “whaling life” at that time.  His illustrations document an entire whalehunt, as well as well as the scenes from the Azores, Atacames (Ecuador), the Galapagos Islands, and Hawaii. He also produced many images of birds, fish, and marine mammals as well as a voyage map and plan of Honolulu Harbor.   In his journal, he noted three Indians aboard the whaleship that would have included Peter George, George Cottrell (also Mashantucket Pequot), and John Uncas (a Mohegan noted in Olmsted’s book/journal, but does not appear on the voyage crew list).

Journal data and illustrations used with permission from the Beinecke Rare Book and Manuscript Library.  Yale University.  Please note that you can view a slideshow of selected images from the Bark North America journal kept by Olmsted, on the side bar located on this page.