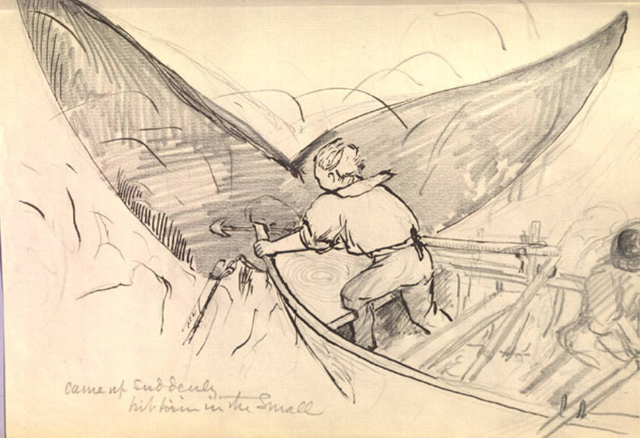 This story map traces the bark Clara Bell and her long journey from New Bedford, Massachusetts to various whaling grounds across the globe. Robert Weir, author of the journal this story map is based on, was on board the whaling bark Clara Bell, and his account describes the life of a whaler and the different places he traveled to. Robert “Wallace” Weir (1836-1905) was the son of Robert Walter Weir, who was a professional painter and a professor of drawing at West Point. At the age of fifteen, Robert Weir had a falling out with his father (as expressed in his journal) and ran away from home to become a sailor. He started his sailing career under the pseudonym of Robert Wallace. He was enlisted as a greenhand on the Clara Bell, under the command of Charles H. Robbins, from 1855-1858. A greenhand is described as someone who joins a whaling ship with no experience at all. Many were lured through the prospects of being able to travel and make money (even though greenhands made very little money). Like the other seamen on the ship, greenhands also had to engage in the daily tasks of keeping watch, cleaning and repairing the ship, as well as rowing the oars of the whaleboat, during whaling expeditions. Weir thoroughly explains the rigorous labor of being a whaler in his journal (LOG 164). What makes his journal interesting besides his ability to capture each moment of the hunt in detail, are his personal drawings that he included as well. This shows that while a whaler’s life was difficult, there was still time to appreciate art in both the visual and written format. The story map that follows depicts his first year of life at sea with a focus of exploring the Atlantic and Indian Oceans. The intent for this story map is to highlight various facets of life on board a whaling bark and to inspire others to read Robert Weir’s journal in its entirety.