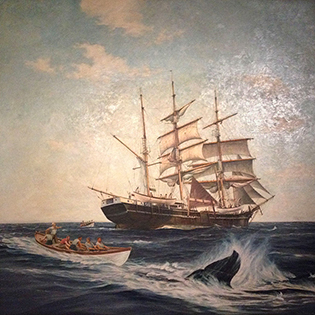 This voyage map represents a voyage of Connecticut Indian mariner, Edward Uncas, a Mohegan on the whaleship Connecticut of New London.

This voyage is typical of the South Atlantic whalefishery. Many vessels would either troll the waters of the “Brazil Banks” off the coasts of Brazil, Uruguay, and Argentina as well as the Falkland Islands or search for whales farther to the east in the area between the small volcanic island of Tristan da Cunha and South Africa.  Many vessels from New England and elsewhere focused heavily on these areas until the late 1830s when the whale populations had been decimated.

Under the command of Capt. Parker H. Smith, the ship Connecticut departed New London on June 9, 1830, bound to the “Brazil Banks” of the western South Atlantic.  On this voyage, the Connecticut took in 252 barrels of sperm oil, 1,483 barrels of whale oil, and an unknown quantity of whalebone.

*Please note that the logbook is missing the first few weeks of entries, so the voyage seems to begin around the Azores, but actually began in New London.