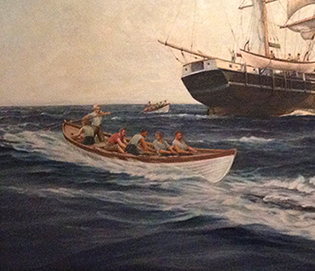 Edward Uncas carries with him perhaps one of the most recognizable surnames in American history.  Yet, to date, he is unknown from tribal records.  His absence on the land is unequivocally connected to his existence at sea as his entire life appears to have revolved around whaling.  Uncas appears in the crew lists for ten whaling voyages (though he probably only went on nine of those) beginning in 1829.

Through these crew lists, we know that Edward Uncas was born at Mohegan and was an occasional resident there.  He is most likely one of the four unnamed children of John Uncas Jr. and his wife Esther that were noted in an 1827 Mohegan census  His siblings would likely be John and Benjamin who also appear frequently in customs records.

Edward's story is not uncommon.  For many Indians, the customs records represent the only evidence that they ever existed.