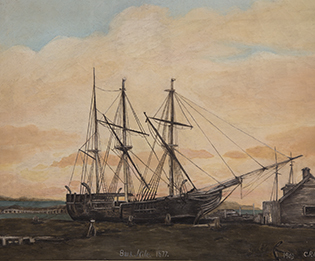 This voyage map represents a voyage of Connecticut Indian mariner, Amos Washington George, on the 1862-1863 voyage of the ship Electra, and a few months of the voyage of the bark Nile (coming soon!). In August 1862, in the midst of the Civil War, the ship Electra under the command of Captain Oliver Sisson departed New London “bound for a whaling voyage.”

Its destination was not noted in the crew list collected by the custom’s official, but this map reveals a voyage track that took it across the Atlantic, where they participated in some opportunistic hunting in the south Atlantic, then to the Indian, and Pacific Oceans in search of whales along the southern coast of Alaska.  They later stopped to resupply in Doubtless Bay, New Zealand and Honolulu, Hawaii. There, the Electra gammed and sailed in consort with another New London vessel, bark Nile (pictured). For six weeks, they sailed west skirting the Aleutian Islands but on July 11, 1863, “hevy Squals” pushed her too close to the islands where she “struck a rock,” took on water, and eventually sank. The crew salvaged what they could from the wreck and the next day boarded the Nile which was bound north through the Bering Straits and into the Chukchi Sea to hunt bowhead and gray whales. By mid August, the Nile began its voyage south to Point Hope, Alaska and then to Honolulu.

In a larger sense, this voyage represents the whalefishery in decline. By this time, the fishery had shifted towards whale populations in polar regions.