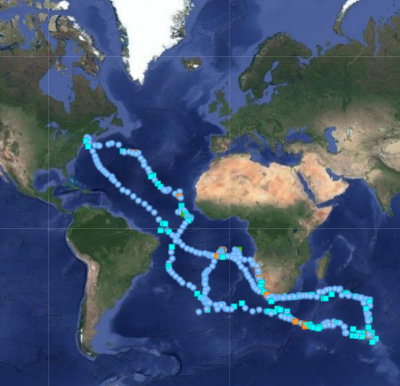 This map represents the September 1891-May 1893 voyage of the schooner Francis Allyn. Captained by Joseph J. Fuller (1839-1920), the Francis Allyn spent 617 days hunting elephant seals in the Antarctic.

By the 1890s, whaling had decreased significantly, as other resources had been found and the need for whale oil diminished. Vessels that had gone whaling also went sealing. Whaling saw a decline in the late 1800s, but sealing rebounded during the same period. During this time, vessels that went whaling focused more on sealing, including the Francis Allyn. Sealing began in the 1500s in the North Atlantic and Arctic, and the different types of seals were used for different things. Fur seals were taken only for their skins, and elephant seals were taken only for their blubber to turn into oil. The Francis Allyn was mainly sealing elephant seals. This expedition was one of the many that hunted the elephant seal almost to extinction by the end of the 1800s.

The Francis Allyn's voyage represents a typical sealing expedition in the late 1800s. This logbook provides not only the location of the vessel, but also a small look into the everyday lives of the crew. Captain Fuller not only brought his son on the voyage, but also his dog, which was almost lost during a hunting trip for rabbits. The crew, according to the logbook, supplemented their rations with wild rabbits and pigs that they hunted. Of specific note is when Captain Fuller writes about his time on the Kerguelen Islands.