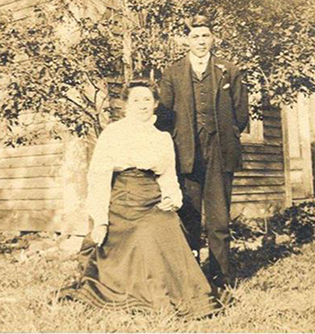 Photograph of Mohegan Edwin Fowler with his aunt. Courtesy of the Tantaquidgeon Indian Musuem.

Most Mohegan men were mariners at some point in their lives. Many made careers at sea.   As Mohegan minister Joseph Johnson revealed in a 1773 diary entry, “Some of my time, I have Spent upon the Ocean wide. I have been down Eastward, as far as to the Western Islands twice. Curvo, & Florus, I have Seen, and to the Southward I have been as far, to the West Indies.  Seen also the Islands between Antigua and Granades, and again from Antigua I have Sailed down leeward Sailed by the Virgin Islands, also by Sandy Cruize, Portireco, down as far as to Mona.”

As mariners ebbed and flowed from Mohegan, they had families, inspired adventure, and planted memories. Great stories have been told, but many have been lost to time. Glimpses, however, exist in museum and personal collections associated with the Mohegan community, revealing that some Mohegans returned home with objects. Were they souvenirs? Trophies? Gifts?