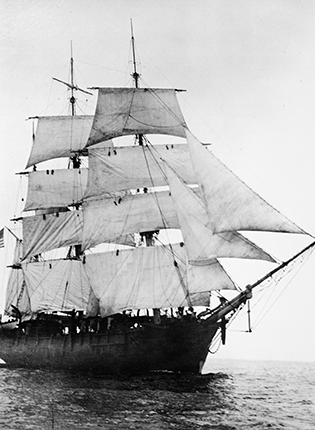 This map was created from the first logbook of the whaleship Charles W. Morgan of New Bedford, MA. The Morgan is the "crown jewel" of the Mystic Seaport collection and she has outlived all others of her kind. Built in 1841 at the yard of Jethro and Zachariah Hillman in New Bedford, MA, the Morgan is America's last surviving wooden whaleship and a precious piece of maritime history. The Morgan's first voyage took place from 1841 to 1845. She was captained by Thomas Adam Norton, master, and many details of the voyage were kept in the ship's logbook, maintained by the second mate, James C. Osborn. On this particular voyage, her main mission was to hunt for sperm whales, although she also hunted other whales such as bowheads and right whales. After leaving New Bedford and making the Azores (Portugal), she headed south, rounded Cape Horn and made her way to the Pacific whaling grounds, where she spent most of her time. At the end of the first voyage, she even headed up to Alaska to hunt for bowheads and right whales, before turning and heading home. After 1,213 days at sea, she returned to New Bedford with about 2,963 barrels of oil.

This was the first of the Charles W. Morgan's 37 whaling voyages. After her whaling days ended in 1921, the Morgan was preserved by Whaling Enshrined, Inc. and exhibited at Colonel Edward H.R. Green's estate at Round Hill in South Dartmouth, MA, until 1941. In November of that year, the Morgan came to Mystic Seaport where she has dominated the waterfront at Chubb's Wharf.